Changing the future
by switching from silver to copper.

A promise to deliver superior technology and bridge the gap to a sustainable society.

With a mission to deliver superior technology and bridge the gap to a sustainable society, Material Concept Inc. began working to develop and commercialize a copper paste in the spring of 2013 as a Tohoku-based venture. We based ourselves in Sendai City both to capitalize on a university-industry collaboration with Tohoku University, which is renowned around the world for its advanced research, and to contribute to reconstruction following the Great East Japan Earthquake as well as regional revitalization. The problems facing the Tohoku region were brought into sharper relief by the earthquake, as the region faces steep population decline and super-aging demographics combined with shrinking communities. Material Concept will base its R&D, manufacturing, personnel development, and jobs in the Tohoku region, with the aim of achieving sustainable development and growth with the world as our market.

Our strength lies in the ability to maximize the skills and potential of a talented pool of developers and engineers, applying a corporate culture that values freedom and flexibility. We also have the advantage of a compact organization that fosters open discussion and creative individual ideas, combined with rapid and responsive decision making.

Our employees are equally committed to leveraging new and innovative technology to change society and the way we live. Developing innovation can sometimes mean confronting existing values. No matter how challenging the journey, we will move forward with the courage and dedication to build a new future. 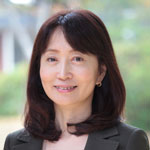 Miho Koike, CEO, Material Concept, Inc.
From 1996, Miho Koike worked for 14 years at a government agency as a staff person and coordinator in a department supporting the commercialization of university technology. In 2006, she co-founded Advanced Interconnect Materials LLC. In 2010, she joined a venture affiliated with the University of Tokyo, and as its director oversaw business collaboration, corporate planning, and sales as well as the establishment of a plant. In 2013, she established Material Concept, Inc. and assumed the position of its CEO.